Initially, Japanese people didn’t have any written forms whatsoever to communicate with each other. It is believed that around the fifth century, the Chinese did the trading with the Japanese up to the point that the Japanese people began to absorb the Chinese’s writing system. For your information, at that time, Japan had already had their own language system and it is still used up until now.

However, as the time goes by, not all of the Chinese characters are adopted by Japan. There is also some Kanjis that originally come from Japan.

As I told you earlier, the Japanese has its own language system. Then they took the characters and the way to read it from the Chinese, which is called Onyomi (音読み), even though in some ways, the Japanese people keep retaining their own language. For that reason, the Kunyomi (訓読み) exists.

Let’s go deeper as how those things work. For instance, the kanji 新 has at least two ways of reading it, they are shin and atara.

Atara is the Japanese Reading (Kunyomi), even though atara is not the proper way to read it. It needs to be put together with its Okurigana, so it becomes atarashii (means: new). Although the Japanese borrowed the Kanji characters from the Chinese, they didn’t ditch their own language. They match their language with the Chinese characters. Before Kanji were introduced among the Japanese, of course they had already known the word “new”. However, they didn’t have the characters that could describe it. In order to fill that hole, they took the Chinese characters which had identical meaning and they still used the Japanese Reading. From this point onwards, the Kunyomi concept was born. So, the kanji 新 has two ways of reading it. They are shin (On) and atara (Kun). They have the same meanings, but somehow they are different in the way of using it.

Generally speaking, the Onyomi is used in multiple Kanjis that are put together to combine words, for example 新聞 (read:shinbun, mean: newspaper), 新幹線 (read: shinkansen, mean: super-fast train) which forms the noun. On the other hand, the Kunyomi is generally used in a single Kanji followed by Okurigana. For instance, 新しい(mean: new) and people’s last name (family name) such as 山田 (Yamada) and 金田 (Kaneda).

By the way, for some of you who still wonder what Okurigana is, it is the Hiragana characters that follow a Kanji character. In Japanese language system, some of the words will conjugate, especially the verbs and adjectives. It depends on the situation and the condition. For example, the word “eat” has dictionary form 食べる (taberu), the ~masu form 食べます (tabemasu), the ~nai form 食べない (tabenai), and so on.

Did you know that the Japanese Kanji for Japan actually means Rising Sun? China considers Japan as a country located on where the sun rises. Geographically, Japan is located on the east of China. 日means “the sun”, while 本 means root. Japanese people read 日本 as Nihon. On the other hand, the Chinese read it as Riben.

If you have watched Death Note anime, you know Raito Yagami (Light Yagami). Some of you might think that his name must be written in Katakana (ライト？) because it is derived from the English word. However, it is actually written in Kanji instead of Katakana. I realized it when Misa was looking for Raito in some kind of park where she’s talking with the Shinigami: 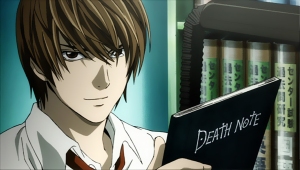 In Kanji, Raito is written using 光. So, is it read by its Onyomi or its Kunyomi? We know that most of the Japanese people’s names are usually read by its Kunyomi. So, what did Misa mean? She actually wondered how to read that Kanji 光 (On: Kou / Kun: Hikari). That doesn’t sound Raito at all. So, how come it becomes Raito?

We might find it confusing because at first, we maybe think that those names should be written in Katakana while in fact, they were written in Kanji. So, what do you think about it, guys? Do you know anyone in Japan that using English words as his/her name but it’s written in Kanji? Or do you still confuse about it? Please leave your comment below 🙂

This site uses Akismet to reduce spam. Learn how your comment data is processed.

A wannabe polyglot who loves eating and traveling. I speak Bahasa Indonesia, English, and Japanese. Addicted to technology, movie, music, literature, and game. Currently working as a web content manager in a Japanese company to keep the wolf from the door.

A Glimpse of My Life